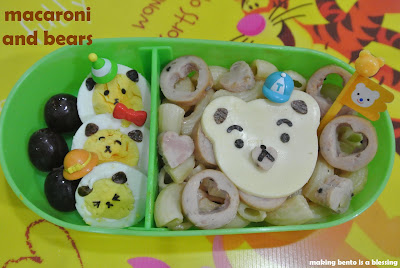 Today E will have his favourite macaroni, I use a bear shape cutter to print on the cheese for the bear. Decorated the few slices of egg as little bears too!
Hope he likes his bento today! :) 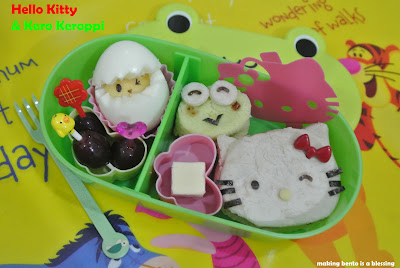 Happy Monday everyone! Glad there is no monday blue for me. :)
I made another Hello Kitty bento for E today, HK is made from sammies, and Kero Keroppi is from Pandan cake.
Inside the box are a hard boiled egg carved into a hatching chick , cheese cube and some grapes.
Posted by Bobo at 5:33 PM 14 comments: 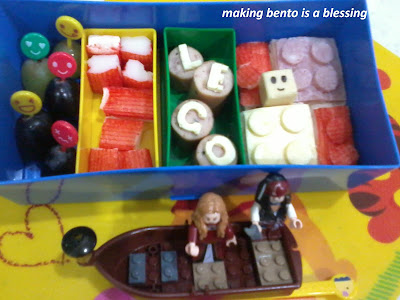 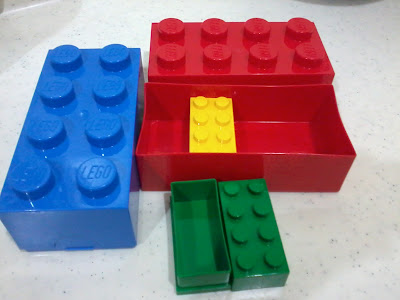 I am pretty excited when preparing my son's bento today.. I just got my Lego Bento boxes as a gift from sister back from US. Big E loves LEGO, he likes to play with the Lego blocks since young.
The Lego box are bigger than the usual bento box that I prepared for him, so I need more food to fill up the box. :)
I place ham, cheese and crab stick on sandwiches and cut in squares and rectangles as the Lego blocks. Press some circles on them as the Lego buttons to place on top. There is a cube cheese decorated as the Lego Man too..
Inside the box are some sausages , crab sticks in the tiny Lego box and grapes.
I find the Lego box covers very tightly, if insert the tiny Lego box with its cover , it will be a bit difficult for E to open up the box. So I left out the cover for the tiny Lego box.
E is loving the Pirates in the Carribean Lego toys too, also a gift from his beloved aunty (my sis). Don't we just heart the mini Lego Captain Jack Sparrow and Elizabeth Swann?

Pirates in the Carribean is my one of my favourite movies, i watched all of them. And Johnny Depp is my favourite actor too..;) I love his movie since " who is eating Gilbert Grape" and "Edward Scissorhands". 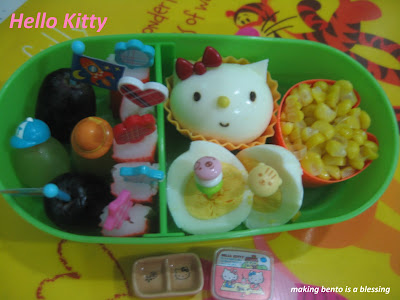 Not sure whether you are a Hello Kitty fan? I surely was.. I collect Sanrio character products when i was a kid. This is the first Hello Kitty bento i made and i forgot her whiskers.. i can't believe myself...lol..
Hello Kitty is from hard boiled egg, sweetcorn as her nose.
Inside the box are also a cup of corn, grapes and crabsticks.
Posted by Bobo at 7:35 PM 10 comments: 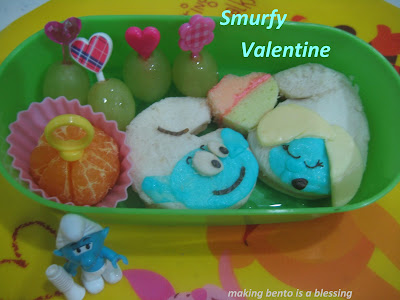 I have been wanting to try on some egg sheets again. I made some blue egg sheets with a tiny drop of blue food colouring on egg white and pan fried it with low heat.
But I still can't make a smooth one, there are still bubbles on the surface.
However I just use them to make Smurfs as the sky blue is just right. Cut two pieces of sammies by using round cutter. Then place the oval shape egg sheets on the sammies for the face. Trim the bread as the Smurf hats and Cheese for Smurfette's blond hair.
Add a few grapes and a mini mandarin orange with a ring on it. The heart was cut out from strawberry swissroll. I have also put in a half boiled egg in another layer of the bento box too.. but didn't take a photo of it.
Most probably I won't be free to make cute bento for my boy next week, so wish you all Happy Valentine's!
Posted by Bobo at 5:07 PM 25 comments:

Making bento is a blessing

Promote Your Page Too

This is a Flickr badge showing items in a set called Bento. Make your own badge here.

For the Kids Fridays

we are talking about...